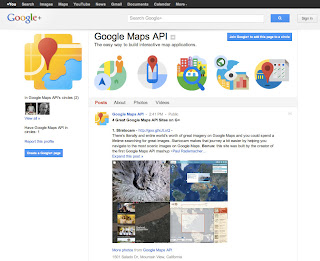 The Google Maps API Page will be used to give helpful tips about using our APIs, announce our office-hours hangouts, and point you to new cool maps that we find. We’ll also use the page to tell you about upcoming events, highlight announcements, link to helpful articles, and a lot more. It’ll also give us a stronger means to connect with our valued developer community. For instance, today we announced the next Google Maps API Office Hours, in which you can connect to the Maps Developer Relations team through Google Plus Hangouts.

Over the past couple of months, the Maps DevRel team has been connecting with Google Maps API developers through our personal accounts. We’ve now created a new circle that you can follow that has all of us in it.

For years, this blog has been the primary way for developers to keep up to date about the goings-on in the Google Maps API world and that isn’t going to change. We see the new Google+ page as adding a new way for you to connect with the Google Maps API team.

So if you want to learn more about the Google Maps API, connect with other map developers, and keep up with the latest news, add us to your circles!