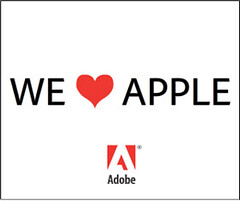 If Adobe can position itself as an open platform advocate, it will be one of the great feats of modern marketing. The company has spent the last few years being bashed — and banned — from Apple’s mobile products. After Steve Jobs wrote an open letter explaining Apple’s distaste for Adobe’s product Flash last month, Adobe is fighting back.

Today, the company launched a digital and print campaign extolling the company’s affinity for digital freedoms and openness. The trouble is, Adobe is not an open platform. This could be a hard sell.

The campaign, which is visible around the web and in publications like The Washington Post starting today, features a simple slogan: “We [heart] Apple.” But Adobe’s doesn’t heart the company’s handling of its products. A click on Adobe’s ad sends people to the following message: 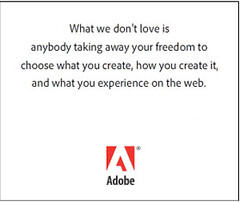 The company has also written an open letter to rebut Apple’s aggressive denial of Flash services on its mobile devices:

“As the founders of Adobe, we believe open markets are in the best
interest of developers, content owners, and consumers. Freedom of
choice on the web has unleashed an explosion of content and transformed
how we work, learn, communicate, and, ultimately, express ourselves.

If
the web fragments into closed systems, if companies put content and
applications behind walls, some indeed may thrive — but their success
will come at the expense of the very creativity and innovation that has
made the Internet a revolutionary force.”

The problem with this line of thinking, is that Apple claims Adobe’s closed system is the hurdle to developer freedoms. In his recent letter, Apple CEO Steve Jobs took issue with Adobe’s idea of “open”:

The way Jobs puts it, it is Adobe’s control over Flash, and its slow reaction time fixing bugs and creating updates that has resulted in its exile from iTunes products:

“We know from painful experience that letting a third party layer of
software come between the platform and the developer ultimately results
in sub-standard apps and hinders the enhancement and progress of the
platform. If developers grow dependent on third party development
libraries and tools, they can only take advantage of platform
enhancements if and when the third party chooses to adopt the new
features. We cannot be at the mercy of a third party deciding if and
when they will make our enhancements available to our developers.”

Adobe’s ad campaign certainly seems warranted. The company has taken a beating across the web for the memory hogging and buggy reputation that Flash has gotten over the years. Meanwhile, many techies have taken Apple’s side. 50% of Ars Technica readers agree with Apple’s stance. And engadget wasn’t the only one to note that Adobe may have to translate its ads into HTML5 for anyone to notice them.

The real test will come with Flash 10.1, Adobe’s much anticipated
mobile release, which hopes to solve some of the problems that Apple
has listed with Flash.

Flash is currently synonymous with design online, as this graphic proves:

But the web is littered with programs and products that once dominated their respective fields. Unless Adobe can prove that its products can work in the mobile space, where things like performance and battery life dictate usage choices, none of those numbers will matter.