I’m at AdTech today speaking on a mobile marketing panel and squeezing in whatever briefings I can. I just had the chance to meet with Scanbuy, one of the companies in the quickly growing mobile bar code scanning space.

As we’ve written, the company boasts impressive device compatibility. This comes from carrier and ODM deals that position the app on deck or within easy access of many devices and platforms. Growth for Scanbuy and for the medium overall will likewise come from better consumer awareness.

That ball is being pushed forward from apps like ShopSavvy and RedLaser, which hold top spots in the app stores of Android and iPhone, respectively. Scanbuy is also working with Verizon and a few other brands like Heineken, which are adding QR codes to their print media campaigns. Scans bring users to mobile app downloads or additional brand messaging and info.

Based on the marketing muscle of these companies, presence and use of bar codes will become more familiar to mainstream consumers. Smartphone penetration will also help adoption. Scanbuy is compatible with lower-end phones but VP of Marketing David Javitch asserts that most usage comes from smartphone owners — based on device capability and user proclivities.

Meanwhile the company is seeing 3x-4x usage growth per month. Most of this comes from product UPC codes because of the familiarity with the format and its ubiquity in retail environment. But 2D codes and QR codes should grow based on all of the above reasons. These formats are also pervasive in Japan and taking off in Europe.

As for advertisers that sign up to be a part of the program (generate QR codes and associated campaigns), there are the usual suspects of national brands including those mentioned above. But interestingly, Javitch reports that half of businesses signing up include small businesses that want to push promotions and business information through bar codes.

They’re generating QR codes to go in their windows, menu inserts and existing print ads. Scanbuy charges a variable rate, based on the business size and usage of the “dashboard.” This is generally a few hundred dollars per year, according to Javitch, which has resonated with lots of SMBs interested in the trackability and instant gratification of foot traffic.

“It’s an approachable price point,” he says. “Especially for businesses that are already doing traditional media advertising such as direct mail. This is something you can track easily and see immediate results.” 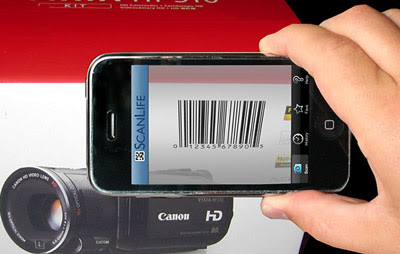