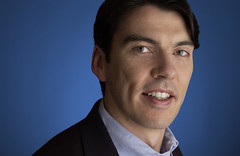 AOL’s CEO Tim Armstrong has been at the company for over a year now. As he readily admits, AOL has a long way to go before it will be able to stop depending on its slowly depleting dial-up revenues. But on stage at CMSummit in New York on Tuesday, Armstrong highlighted a key point of his strategy. Journalism is technologically challenged. AOL’s trying to change that.

As moderator John Battelle pointed out:

“If you had said five to ten years ago that AOL
would be fostering a new approach to journalism, that would have been a weird
concept.”

But that’s exactly what AOL is attempting. And not simply by snatching up quality writers. Armstrong is betting that content will be the next huge development area online:

“The content space will
be the epicenter of the internet.”

Part of the reason for that is how slow journalism has been to adapt to changing technologies. Even at the most basic level. For instance, journalists are often not included in corporate technology upgrades. Says Armstrong:

“Journalists I met
were often the only people in
the room who never had access to a lot of info, except what they already
knew.”

That is a problem he wants to fix at AOL, by creating platforms and strategies for writers and editors that utilize the best the web has to offer. Armstrong says:

“You can pretty much
go to any professional industry, and there’s some piece of data system
that helps people scale what they do.”

Distribution — and targeting — has been a huge growth industry online. According to Armstrong:

“Ads are targeted
that way. Content systems haven’t been.”

Editorial content in the past was created and sent to users as
if they were all the same. Any magazine or newspaper reader received
essentially the same product. AOL is trying to change that. As John Battelle put it:

The company is not alone in this effort. Brands from Google to Yahoo are trying to personalize the news experience. Many are using bots and search crawlers to aggregate content for users. Armstrong is betting that humans will do a better job.
As he says:

“We are attacking local with real journalists.
That’s different than what our competitors are doing.”

One company that often comes up at AOL talks on this subject is Associated Content. Armstrong is an investor in the
SEO friendly content engine that Yahoo recently acquired. As he said today, “it started in my
basement.”

But he did not see a place for Associated Content
at AOL. Partly because it did not fit his definition of quality content creation. At AOL, he says:

“We will create deeper content experiences than
anyone online.”

AOL has an SEO-focused content engine in Seed, but assignments are assigned and edited by AOL employees. And he says that AOL is not simply interested in creating profitable SEO generated content:

“There
are cases where we’re doing profit content, and cases that are less
profitable. If you only sat around and did profitable content, you could have some level of sucess. But if you want to serve the world’s community and have a robust brand, you need a spectrum of profitable things.”

As he points out, AOL went from having 20%
original content creation when he joined to 80% original content today. But creating good content is not cheap, and Armstrong is aware that AOL may not be able to beat the competition in every area it would like. Over the next year, there will be consolidation at AOL. He says:

“AOL has over 200 consumer facing prpoerties. We won’t fight in all of those spaces.”