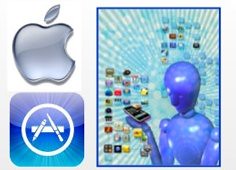 Apple may be charging a premium for placements on its new mobile ad platform, but it looks like brands that use iAds will also have access to features that no other ad network can deliver.

According to an email sent to developers planning to advertise their apps within other iPhone and iPod apps, iAds is offering a few features that cannot be duplicated by any of their competitors. Will conversion tracking beworth the premium Apple is charging for ads?

According to TechCrunch, Quattro Wireless, which is now owned by Apple, recently sent an email out to app developers to announce a new program called ViP (Verification of iTunes Purchase):

“The VIP program is aimed at app developers who use iPhone ads to
drive downloads and purchases of their own apps. It will tie the ad
directly into purchasing data from iTunes, letting app developers
measure the conversion rate of ad impressions to downloads. As the
slide indicates [below], this tracking is made possible with a “proprietary
direct link from the ad to App Store” and once a “user downloads your
app, they won’t ever see your ad again.” 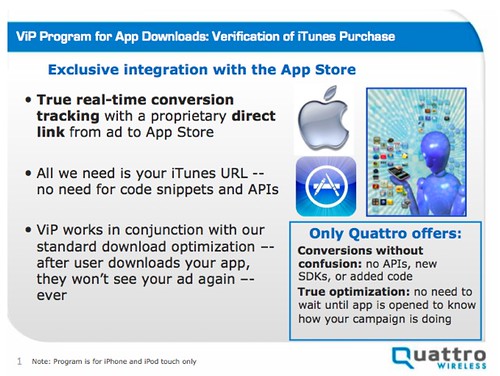 More importantly, all of this will be automatic. As Quattro’s email stated: “No SDK or server-side integration—this cannot be duplicated by any of our competitors.”
These are nice features for developers, considering that Apple is notoriously stingy about sharing numbers it gleans from the iTunes store. Other mobile ad networks try to measure conversion rates, but they don’t have the access that Apple does.
If Apple can provide developers with real-time ROI information, they
could save advertisers a lot of money by allowing them to cut short
campaigns that aren’t performing.
That said, iAds are not going to be cheap. According to AdAge, marketers who purchase
iPhone, iPad and iPod touch ads through iAds will have to pay $10 per
thousand impressions plus $2 per click.
As this announcement shows, Apple can easily give iAds products extra value by witholding data and other features from competing ad platforms. But that is especially interesting considering the fact that the FTC is considering blocking Google’s $750 million purchase of mobile ad network AdMob.
Apple’s $275 million purchase of Quattro last year is not so different from Google’s. And considering that Apple is already running away with the mobile market with the iPhone and potentially the iPad, the fact that it is making moves to give its ad products preferential treatment in mobile should be concerning. Especially with the potential that Google’s mobile ad deal could be blocked. If Google’s AdMob and Apple’s Quattro are not competing in the mobile space, Apple’s moves to thwart competitors in the space could quickly become dubious.
Images: Quattro Wireless