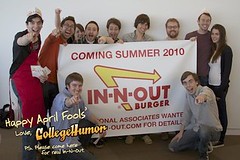 Comedic site CollegeHumor.com is known for pranking its friends and audience, but those jokes don’t often involve free corporate publicity. Not so this week, when the site pulled an elaborate prank on New York, pretending that beloved West Coast burger chain In-N-Out would open a New York outpost this summer.

It worked. Sites like Eater Guest of a Guest and Feast all picked up the news. And aside from advertising In-N-Out, CollegeHumor gave New York a taste of how it does advertising.

Because of the prank, In-N-Out attracted major media coverage, aggressive tweeting and some very sad New Yorkers yesterday. According to Fox 11:

In one of the locations, the empty storefront vacated by Virgin
Megastore in Union Square, jokers dressed up as In-N-Out Burger
employees could be seen handing out flyers to passers-by.”

But more than just a little prank, this particular item served as a free ad for In-N-Out — and the CollegeHumor advertising department. CollegeHumor prides itself on coming up with interesting and customized ad campaigns. The company’s websites reach over 10 million users who stream 30 million videos a month. CollegeHumor boasts on its website:

“The same editorial team responsible for… content is also in charge
of creating custom ad campaigns, meaning you’ll be getting top notch
creative for your buy.”

And this stunt is a great example of how CollegeHumor approaches branding. CollegeHumor cofounder Ricky Van Veen tells Econsultancy:

In-N-Out isn’t prepared to capitalize on all this free publicity. An In-N-Out spokesman tells New York magazine that the company won’t be coming to New York any time soon:

“One of the reasons is that we deliver things fresh from our main warehouse. And that’s in Southern California.”

But maybe they should rethink that strategy. Considering that so many people on the east coast would work to have them here. Like Eater commenter PrincessBurger, who wrote:

“sad…really
sad. that’s all we want here. and now…not going to happen.
N-out-burger. BOOBOO! I think we should make it happen! who is on
board???”

Meanwhile, providing free marketing for a family owned burger joint in the city that never sleeps is an easy way for CollegeHumor to draw more brands to its site. April
Fool’s jokes often run the gamut between groan worthy and mildly
surprising. Rarely do they also provide great exposure for a small brand in a city that doesn’t even offer its products. But that’s how CollegeHumor rolls. Says Van Veen:

“In-N-Out wasn’t aware of what we were doing, but they were great sports about it afterwards. People keep telling me it’s the best publicity stunt they could ever ask for. If that’s the case, let me say publicly that I wouldn’t turn away a free burgers for life card.”