There are 71 million pet owners in the United States, all of them potential members and supporters of the ASPCA. Debbie Swider (pictured left), the non-profit’s senior e-marketing manager, would dearly love to enlist all of them as members and donors.

Advertising on pet and animal oriented sites is only the tip of the iceberg when your target audience is that large. “We have to make sure we’re using the channels that allow us to find the right people wherever they are online,” says Swider. “Seventy-one million is a huge number. Getting just five million of them would be exciting.”

Swider made the decision to embark on a cost-per-lead (CPL) aquisition campagin, powered by provider Pontiflex. Each ad unit captured a name and email address. Each lead was imeediately followed up with a relevant email communication. And immediately, all of Swider’s key metrics: open, clickthrough and actions taken, soard in comparision with email that was being delivered through other channels.

“Just like everyone else we were struggling with open rates,” said Swider, “When we started getting good response, it should be get to know us, get to know our content. It’s first aid.  We wanted to pique their interest, especially when you start talking about acquiring leads. You want to give them something more meaningful, deepen the relationship. Starting late last year, we noticed more people were opening and clicking [the CPL-generated emails]. These guys don’t know as much about you. It’s your responsibility to engage that lead and make them your loyal brand member.”

CPL ads put the ASPCA into new channels, which had become critically important. The organization had been running ads on sites it was familiar with, such as Dogtime. Now ads are running on sites such as PlanningFamily.com. “This is a great way to reach people who might be pet lovers or activists, but who aren’t actively going to pet sites.”

“We were starting to see duplication. Names we were familiar with. We can’t afford to spend on that. Seventy-one 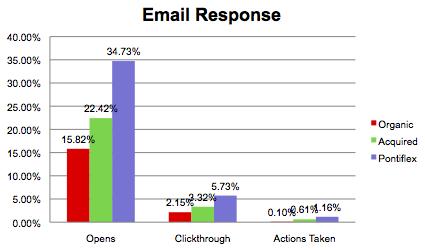 million households have pets. We’re trying to find ways to engage that person. How do we bring you into the fold to raise awareness that there are, say, domestic violence ties to pet abuse – all of these issues?  Once we see where these people are and bring them back, we can make a case for a larger CPL campaign in the future. It’s always a small test, under  100,000 – less than what anyone else would spend.

In the end, of course, it’s ‘what s the ROI?’  Well, it takes us three, six, nine months to actually see that. We rarely see an immediate conversion or return on our investment. It’s not a one-night stand, it’s a marriage. They’re dipping their toe in the water. We don’t lose them once we have them. We’ll often get trusts and wills from them, eventually. We will keep them for life. So for us, ROI is never positive in the beginning. The ultimate goal is a monthly sustaining donation. It’s not a one time sale, and it’s not an instant sale.”

So does the ASPCA have an immediate campaign goal?  “I’m happy if they’ll take any action I can measure,” says Swider, “Downloading an app, making a donation, some actionable, measurable thing.  We’re starting to understand behavior. If you come in as an advocate we’re sending more advocacy content. We define, segment and target and speak to you in a way that reflects why you came to the site in the first place.”

Given the ASPCA’s non-profit status, budget is always a problem. If Swider found more money tomorrow, how would she spend it?

“It would definitely be a combination of CPL and a more creative campaign to reach new ASPCA members. For example, we’re talking now about how to reduce your pet’s carbon footprint.”

Social media, she reminds marketers, would also be a part of any new budget allocation. “I see over and over again that social networking has made our work harder. This is what perplexes marketers the most. I have to earn that buck. I have to earn that loyalty. The tools are free, but the time it takes and the energy and the creative. It is not free. It’s the great equalizer. You can be a two man team or a four million man team and get the same results. But you have to work for it!”