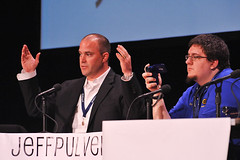 Best Buy is one of the brands most known for its use of social media for customer service. The company now employs hundreds of employees that respond to customer questions and concerns via Best Buy’s Twitter feed @twelpforce.

But the company continues to struggle with its approach to social media, just like everyone else. And unlike many social media strategists who complain that upper management doesn’t support their efforts, Best Buy’s Derek Meister says that a bigger hurdle at his company is convincing everyone else in the company that social matters.

At the 140 Character Conference in New York, Best Buy had four representatives talk about their Twitter strategy, which has gotten plenty of attention. The company lets any Best Buy employee respond to questions from users on Twitter. That seems like an opportunity for many missteps in company branding, a concern that Best buy is well aware of.

Meister, also known as “Agent Meister,” or @agent3012 on Twitter, says that the company works hard to get its employees to answer questions the right way.

“We all represent a voice of Best Buy that collectively makes up our company voice.”

A main benefit of moving customer service to Twitter has been cost
savings. All of the Best Buy employees addressing issues on Twitter do
so on company time, but that still beats the expense of call
centers and answering questions over the phone. Says Meister:

“That’s a lot of phone calls we don’t
have to answer.”

Obviously, at a company that encourages so many employees to reach
out via Twitter, Best Buy’s upper management is a fan of social
media. A harder sell is convincing managers and employees at various branches that social media should be part of their daily business. Says Meister:

“One of our biggest challenges is getting everyone in the middle on
board.”

That’s because many Best Buy employees are focused on fulfilling the requisites of their job description.

“They’ve been laser focused on making sure they haven’t had to lay off
anyone, optimizing their traffic and selling… We need people to open
up and say, ‘There’s a different customer out there.’ We’re trying to get people to introduce social in their vernacular.”

For some it was an easy sell. It helps that many of the company’s employees are young and interested in new tech developments.

“Most of our employees have a social media presence already. The number one
thing you hear from people is ‘I get to do what I do every day but on Twitter and get paid?'”

David Overton is one of those employees, who works at a Best Buy store in Danvers, Massachusettes.

“The store asked us to do a Twitter page, helping people locally, and I decided it
was cool to help people on a national basis.”

Perhaps sometimes he takes his role
too far. Overton was on stage filming the Best Buy presentation with a
handheld video camera, while also nominally speaking. And having so many different voices speak for a brand could result in a host of misstatements online. But Best Buy is wagering that the gain outweighs any of those risks. Says Meister:

“We may make mistakes in public, but we’re also going to share
some pretty useful info in that place and time you need us.”

Meister says that what he does “doesn’t feel like marketing, it feels like relationship building
stuff.” Opinions will differ on whether an entire company needs to be active on
Twitter, but getting an entire company attuned to listen to customers more closely is something every company can do.