Can Microsoft go where others have failed in social media? This week, the software giant launched a social media aggregator. Also, Bing has created a new social shopping tool. If Microsoft can figure out how to tame and collect the social web, it may just have a killer app on its hands. But that is easier said than done.

It seems like everyone in digital wants to get in on the aggregation of social
content online. Microsoft’s bid is Spindex, which aggregates
information from Facebook, Twitter,
RSS feeds, Bing and Evernote. Spindex is currentlyin beta. (You need a Windows Live ID to use it)

According to Lili Cheng, general
manager of Microsoft FUSE Labs:

“As you increasingly tweet, post to Facebook, and
capture ideas with tools like Evernote, we want to help you get the
most out of your social activity by exposing the right information, at
the right time, in a way that’s meaningful.”

That’s an admirable approach. Meanwhile, the company is also making its search engine more social. Today it launched a new shopping tool. From the Bing blog:

“You can now search Bing
Shopping for the HTC HD2 Smartphone, and ask your friends on
Facebook and Twitter if Bing Shopping is giving you the best price after
cashback or if this is the one you should buy.” 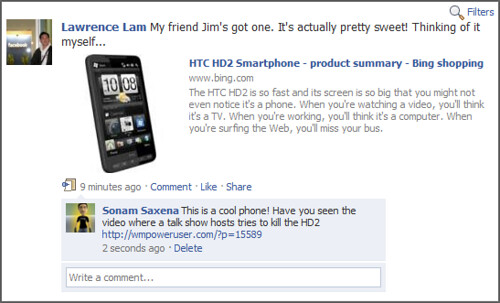 To share an item, Bing uses a shortened URL with a product name and lets users compile the text they want to share with friends. Potentially, this is an area where Microsoft can compete with Google.

Just this week, Google unveiled a new user interface for its search engine that makes it more, well, like Bing. As John Battelle put it on his Searchblog:

“Bing (and Ask before it) has built a service on top of commodity search
results, one that does not require you to go back and forth, back and
forth, but rather instrument your search session using intelligent,
persistent navigation. This is exactly what Google’s new UI lets you do.”

Properly curating the social stream is not an easy task. Google has already fumbled an attempt at social aggregation with Buzz. And there’s no proof that Bing will get it right. Cheng told the audience at the Web 2.0 Expo: “We kind of call it the impossible project.”

That said, if Bing can organize social better than its competition, it will earn itself a sizeable foothold with consumers. We’ll just have to wait awhile to see if Spindex and the new features get anywhere towards doing that.