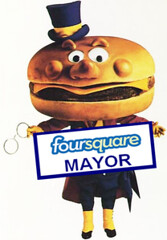 McDonald’s may be a large brand, but it doesn’t always want to invest large budgets in marketing. With a little help from Foursquare this Spring, the fast food chain increased foot traffic 33% in one day with an investment of less than ,000.

Rick Wion, head of social media at McDonald’s, is a big fan of such pilot programs. As he says, “the bigger your budget is, the harder it is to scale.”

Speaking at the Mobile Social Communications conference in New York, Wion explained that “an app is not a strategy.” However, for many businesses trying to get into the social marketing space, it can be confusing and overwhelming to figure out where and when to invest their time and money.

Wion suggests creating pilot programs with small amounts of money and using the results to win over executives and shape larger marketing efforts.

Wion started at McDonald’s just a few weeks before Foursquare Day this year, a consumer generated event that celebrated the check-in service on April 16 (42). He noticed the postive word of mouth surrounding the national event and decided to contact the organizers to foster a partnership. McDonald’s ended up offering 100 giftcards to Foursquare users who checked into McDonald’s establishments on 4/16.

Rather than offer coupons to every person who checked into a McDonald’s that day, Wion decided to choose random winners. While not guaranteed a prize, many users checked into McDonald’s for the chance to win the and giftcards.

Moreover, even before the special went live, there was an uptick in check-ins to McDonald’s stores. McDonald’s saw over 50 articles and blog posts written about their special, and won 600,000 new fans and followers. Overall, there was 99% positive feedback.

The most important metric for Wion was foot traffic. On Foursquare Day, McDonald’s saw a 33% increase in check-ins from the day prior. And for the week of the special, check-ins increased 40%. Says Wion:

“I was able to go to some of our marketing people — some of whom had never heard of Foursquare — and say, ‘Guess what. With this one little effort, we were able to get a 33% increase in foot traffic to the stores.'”

Of course, the increase could have been attributed to McDonald’s current customers simply using the new digital interface of Foursquare, but creating a communication line between customers and a brand can help to increase both customer loyalty and sales.

With this special, Wion also sidestepped an implementation problem that chains may have with check-in services like Foursquare. Right now, consumers redeem specials on Foursquare by showing their phones to cashiers and employees of brands that have partnered with the company. But at an international chain like McDonald’s with 14,000 stores, it’s difficult to expect every cashier to know what specials are being offered on differing digital platforms. Says Wion:

“We want it to be point of sale so that the burden to know the different specials isn’t on the crew person behind the counter.”

In addition to this pilot program with Foursquare, Wion is working to implement all sorts of new digital marketing tools at McDonald’s. They’re looking to leverage To-Do’s and check-ins, mobile wallet technologies, bolster live events through digital and partner with multiple digital platforms.

“Ultimately we’re going to have a whole suite of ways to engage with people.”

But with all of those, the company is likely to use a similar pilot testing method. Says Wion of Foursquare Day:

“If it costs us ,000 to do a pilot program in mobile social, that doesn’t scale.”