(Cross-posted on the Official Google Blog)

A new look for Navigation on Android 4.0+ phones

In today’s release of Google Maps 6.5 for Android we’ve redesigned the Navigation home screen in Android 4.0+ to make it easier to enter a new destination or select from recent and favorite locations by swiping left or right. 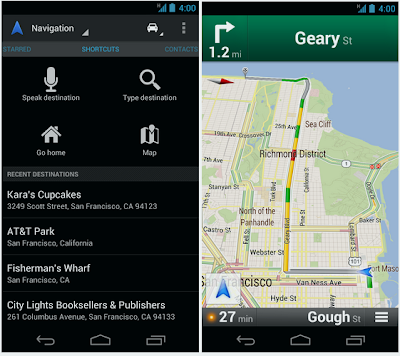 If your device has a high pixel density screen, such as those on Galaxy Nexus, Galaxy S II, Droid Razr and others, you’ll now get higher resolution map tiles that take better advantage of the pixels-per-inch on your screen. The result is a crisper, less cluttered map that is easier to read:

Compare our new map on the right to the previous map on the left. The road network is easier to see, less obstructed by labels, and has more color contrast. At more zoomed-in levels, you’ll notice a more controlled amount of maps labels to avoid cluttering the map and blocking out street names. The new style also helps maps react faster to panning, zooming, and twisting.

You’ll start seeing the new style as you navigate around new areas on the map; however, you can see these changes immediately by clearing your cache from the Maps settings.

Google Maps 6.5 for Android now lets you choose to prioritize a particular transit mode (such as the bus or subway) and route option (like taking the recommended route, one with fewer transfers or one with less walking). Whether you just need to get somewhere as fast as possible, or you want to avoid the risk of a missed connection or you prefer not to tire your legs, you can get the transit directions that best suit you. Transit directions and schedules are available for 475 cities around the world. 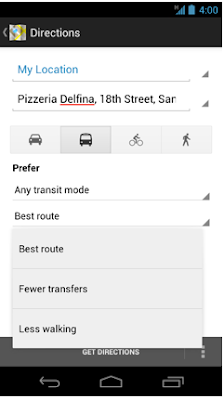 To start using Google Maps 6.5 for Android, download the update from Google Play. Learn more about how to use other great features of Google Maps for Android on the redesigned Google Maps YouTube channel that has 12 new videos available today.