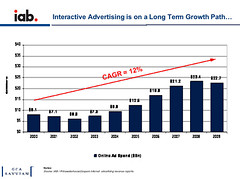 According to forecasters, digital advertising is poised to lead a rebound in the larger ad market. Revenue increases in the fourth quarter of 2009 are expected to continue. And according to the IAB, television advertisers shouldn’t be concerned that the growth in digital will come at their expense.

According to the Interactive Advertising Bureau and PricewaterhouseCoopers LLP, the stalled economy led to a 3.4% decrease in U.S. online advertising revenues for 2009 at $22.7 billion. But in the fourth quarter of the year, online revenues hit a quarterly record with $6.3 billion spent. And while that’s only 2.6% better than the same time a year prior, it is a 14% increase from the third quarter of 2009.

“The record $6.3 billion spent on Internet advertising in the fourth
quarter of 2009, while certainly aided by seasonal demand, is a strong
indication that the worst of the economic impact on Internet
advertising is over and that the seeds of growth have been planted.”

Furthermore, display is seeing major growth. Display-related advertising — including display ads, rich media,
digital video and sponsorships — totaled almost $8 billion in 2009 (an increase of 4% from 2008). In the fourth quarter, display-related online ads earned almost $2.3 billion (up 15% from the same period in 2008).

According to Terence Kawaja, managing director of GCA Savvian Advisors:

“The interactive channel is on an inevitable long term growth path that
to date has only been interrupted by severe recession.”

But what about traditional media? Things certainly do not look good. Total media revenues declined 9% from 2008 to 2009 according to
Nielsen. According to
Silverman:

“Over the past five years, the internet has doubled in size.
As a result, internet revenue continues to gain significantly in its
overall share.”

However, all hope is not lost. Four of the top five non-internet media areas were down, but cable advertising saw 14.8% growth in 2009. And the growth of digital does not necessarily have to come at the expense of TV advertising revenue.

“Rather than interactive stealing ad share from TV, TV is becoming interactive.”

Meanwhile, Publicis Groupe’s ZenithOptimedia also has optimistic forecasts for digital and TV in 2010, predicting
global advertising growth from .9% to 2.2%, due mostly to a 4.3% growth in ad spend for TV and 12.9% growth online.

One benefit to both TV and digital growth has been the emergence of digital video as an advertising platform. Digital video experienced an almost 39% jump from 2008 to 2009.

As digital elements come to terrestrial TV, there is potential to close the loop between online and offline advertising.

While digital revenues have been on a steady incline over the past ten years (save for plateaus during recessionary periods), interactive is still a small percentage of the larger advertising market. Kawaja attributes this to a few factors. One, measurement standardization has been a big impediment to growth.

Nielsen,
comScore, Hitwise and Compete are just a few of the companies trying to
measure online ad effectiveness. But television, Kawaja says, is “a
channel where no one argues the value of a Nielsen ratings point.”

There’s also the issue of purchasing confusion online. Kawaja used this diagram of options between advertisers and publishers online to explain: 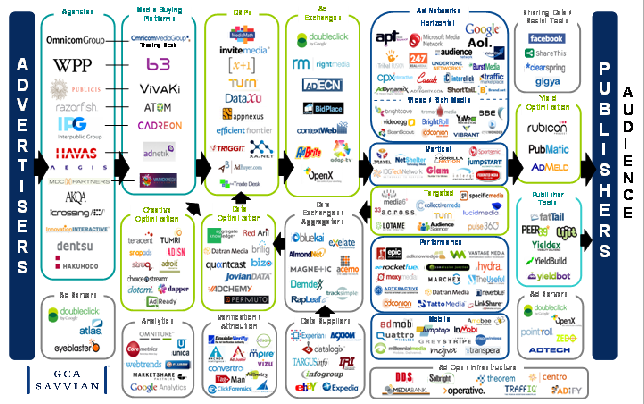 But an even bigger hurdle is that links in the attribution chain are
missing. Display is still suffering from the last click problem
online. But brand advertising attribution problems are even more
pronounced between the online and offline worlds. If someone sees an
online ad and then walks into a store, or sees a print ad and purchases
an item online, there’s no way to track where they came from.

Kawaja sees this as an “opportunity for a new category of ‘converged media’ companies going forward.”

And increasingly, brands are realizing that their offline purchases need to connect with the online world. Kawaja predicts that online ad buys will be tied to the offline experience going forward:

“The holy grail is achieved when digital video is part of the television budget.”