For example, Mashable has been using Hangouts, a live multi-person video chat tool, to meet their audience face to face, creating deeper interactions. “I haven’t seen anything else like Hangouts in terms of crossing that barrier of really making a connection,” Meghan says. “I feel like it’s the deepest connection you could get.”

Hangouts has also connected Mashable employees with each other. With their headquarters in New York City and editors scattered across the U.S. and Europe, Mashable now uses Hangouts as a virtual meeting tool. The screenshare feature even helps Meghan train remote staffers who can follow along with her presentations. 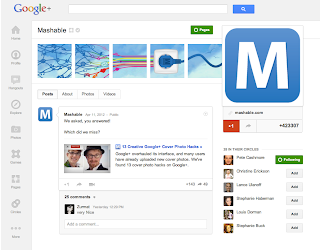 Mashable has learned by doing, and that all started by creating a Google+ page. “We tried a lot of things early on, and were able to catch on quickly to what was working and what wasn’t, and have been able to shift our strategy pretty well from there,” Meghan says. Some of what she’s learned is below:

We think people can learn a lot from how Mashable has built a strong audience on Google+ through its use of in-depth posts, interactive Hangouts, and creative promotions, including the Google+ badge and +1 button. As Meghan notes, “Our community was very excited about this network, and we told them, let’s connect and let’s figure out…how we can both, you as a user and us as a brand, get the most out of it.”