The message from Washington to the online ad industry has been ringing loud and clear: regulate yourselves before we have to do it for you. Taking another step in that direction, industry groups the IAB and the NAI released the CLEAR (Control Links for Education and Advertising Responsibly) Ad Notice Technical Specifications, a set of common technical standards that would enable enhanced notice in online ads. These specifications would allow advertisers and ad networks to provide a clickable icon in or near online ads directing users to additional information about behavioral advertising, including an opt-out option. 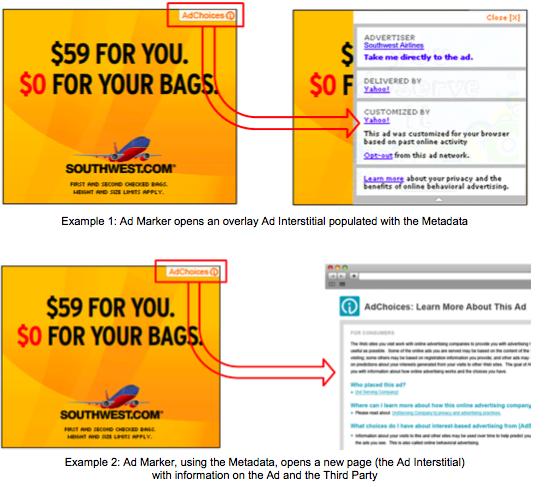 We knew this was coming. Now we have an idea how it might look, as well as function. An icon-based approach was outlined in the Self-Regulatory Principles for Online Behavioral Advertising, released in July 2009 by a coalition comprised of the American Association of Advertising Agencies (4A’s), Association of National Advertisers (ANA), Direct Marketing Association (DMA), Interactive Advertising Bureau (IAB) and the Council for Better Business Bureaus (BBB).

According to the IAB and NAI, the CLEAR Ad Notice Technical Specifications were developed to:

A CLEAR Ad Notice is divided into three components, defined below:

1. Ad Marker: The link either in close proximity to or on the ad itself that allows for
interaction with a consumer to learn more about that ad

2. Metadata: Data about the ad that travels with the ad

3. Ad Interstitial: The visual rendering of the metadata to the consumer

“Transparency and notice are critical to creating a safe and enjoyable consumer experience,” said the IAB’s public policy VP Mike Zaneis, “These specifications will allow third-party ad servers to seamlessly integrate the icon so that consumers have access to more information when they are being served an ad based on their interests and behaviors.”

True enough, but consumer education is a sticky wicket. As any online marketer will tell you, it’s hard enough getting consumer to click on ads, much less on a button containing information about those ads. The tech specs seem easy nough for ad networks and publishers to implement. Whether the measures will have any bearing on the attitudes of federal regulators, or consumers themselves, remains to be seen.