During BIA/Kelsey’s ILM East conference in March, a series of mobile sessions were held in which leaders of the mobile industry were interviewed on stage (see previous post on Foursquare GM Evan Cohen’s Keynote).

WillowTree Apps CEO Tobias Dengel was part of this lineup and offered many actionable takeaways about building mobile products. A BIA/Kelsey report out next week will examine these takeaways including a full interview transcript.

To sum up a few points: develop mobile products from the ground up (not as an afterthought); Keep the user – and the mobile interface – top of mind; and have someone in your organization devoted to mobile. These may seem obvious, but they’re surprisingly ignored.

Below is a small chunk of the on-stage interview. The full version — including in-depth commentary on platform choice — will be available to BIA/Kelsey subscribers next week.

Mike Boland: You work with lots of different mobile publishers so you have a good perspective to see mistakes that are made and best practices. What is your recommendation for questions people need to ask themselves before they get into mobile?

Tobias Dengel: First, many of the people in this audience have Blackberrys; I’ve been seeing them out there. I would encourage you to do yourself a favor and slide those Blackberrys under your seats and then walk down to the Apple store that is 3 blocks away and get an iPhone. Or go out and get an Android phone.

The main thing is that you have to start using these apps and mobile sites. I don’t want to bash blackberry but what I’m saying is that all the growth right now is in iPhone and Android.

That’s where the apps are and that’s where the volume is. You have to get your senior executives using these devices so that they can make decisions about how to build for them.

Second is that you have to be ruthlessly focused on the user. It’s even more important than on the web, but the mistake that most people make is saying ‘I’ve got all this web stuff; I want to put it on mobile’.

Really what you have to do is consider mobile a completely separate medium; start with that and think about what are users going to want.

TD: I’ll give you an example. I was at AOL in the late nineties and worked with AOL Sports where everyone went to get scores. So we put the scores four clicks back from the main page so that we could drive up page views and usage. Even to this day, if you look at ESPN, they might have some scores there but you have to drill down to find them.

But on mobile, ESPN score center app gives you scores in one click. You put your favorite teams in one time and then you get all your scores. Maybe they get one ad unit. Now, do they make less money per user doing that? Yes, but they probably get a lot more uses per day and they’ve protected a flank. Because if they hadn’t done that, someone else would have done a sports scoring app that, with one click, you can get your scores.

MB: If you look at the most successful and downloaded apps, most of them are built from the ground up for mobile, using things like the camera or the accelerometer. The litmus test for me is ‘would this app work on a PC?’, and for the success stories, the answer is often no. How do you respond to that?

TD: The answer should be no. Our belief, and it may sound crazy, is that this transition to mobile is going to be more disruptive than the transition that started 15 years ago from traditional media to the web. The reason is that mobile is so much more complicated.

MB: Organizationally speaking, does this mean that companies with legacy products in print, broadcast, or online, are handicapped by the DNA of those products? Do companies starting off ‘mobile only’ have a leg up in the way they see the world and develop products?

TD: Yes, it’s very similar to what happened in the mid to late nineties where traditional media companies just weren’t able to reorganize themselves quickly enough. A lot of the web companies that popped up then, and are still leading their space now, might be surprised by mobile and unable to adapt.

My suggestion is that in your organization, there should be someone with [the word] ‘mobile’ in their title, and that person should be on equal footing as the person who has ‘interactive’ in their title. It shouldn’t be someone way below who is just taking the website and making it mobile and moving on. It’s got to be a focus. 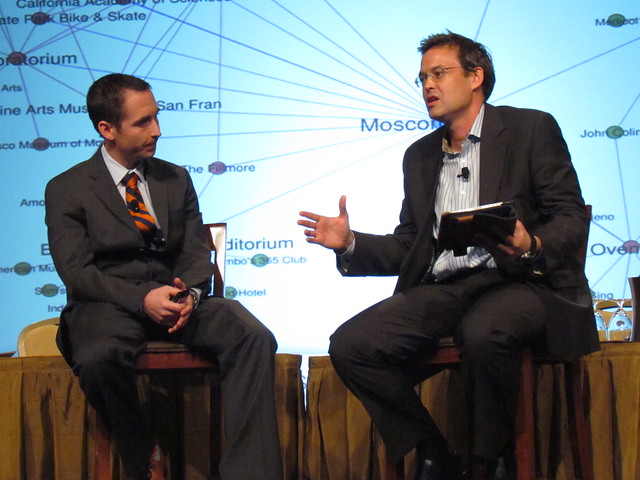