Nielsen says people are spending more time online playing games
than sending email – bringing new meaning to the phrase
“everyone is a gamer.” How can marketers use the increase in gameplay to their advantage? For e-tailers, the goal should be to add
gaming elements to the purchase process, also called “gamification.”
That can be as simple as advertising in and around games, or as complex
as revamping an entire Web site to include badges, points and
virtual currency.

If it sounds like too much work, read on from some stats from Interpret
that prove why gamers may be an e-tailer’s most coveted target
demographic.

Gamers are more inclined to be online shoppers

First, let’s get a simple definition out of the way. For this study, Interpret defined gamers as people who had either purchased a game, played PC or console games, or even just spent a few hours playing social games on Facebook. 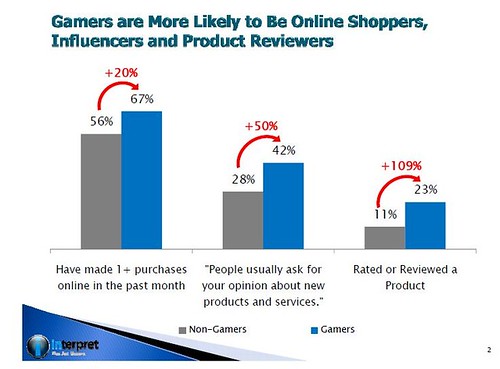 Gamers aren’t just shopping more – they’re telling others about where to shop and why. Interpret found gamers were 109% more likely to rate or review an online product than the average consumer.

Gamers were also 50% more likely to agree that they were “asked their opinion about products and services” by their peers than non-gamers.

Gamers are more inclined to buy within a “gamified” environment

Gamers were 70% more likely to make purchases from within a gamified environment (one that includes game-based elements), than average consumers.

Drilling down further, social gamers were two times as likely – or more than 100% likely – to shop from within the gaming environment.

The increase in social/casual gaming is largely responsible for the
broadening of the description of “gamers” overall, making this last statistic especially relevant for ecommerce.

If an etailer can mimic social gaming cues by adding features like rewards, frequent shopper badges, points, or virtual credits to the online shopping experience they can really harness this propensity for gamers to shop while in the gaming environment.