With movies from Netflix, games from ESPN, music from Last.fm, and status updates from
Twitter, Microsoft has evolved the Xbox 360 into a premium content
delivery device, not just a game console. Now, with its new Kinect
motion-controller system, the company has the means to turn the Xbox 360
into a hyper-targeted ad platform.

After all, Kinect can recognize
different users by their faces.

“Kinect brings a really interesting opportunity as it relates to that. Obviously with Kinect, it has facial recognition, so we can cater what content we present based on who you are.” 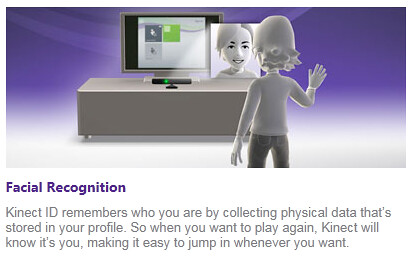 CNET’s Josh Lowensohn sums up the rest of Durkin’s presentation:

“[He] then offered up a situation where someone in a mixed household comes to use the system and gets a different set of Marketplace content presented to them, with different ads. The same technique could be used to serve up advertisements aimed at groups, when the Kinect could tell that you were in a room full of people, Durkin said.”

That’s the kind of addressable advertising opportunity that Google is trying to deliver with Google TV, and that the cable companies (in the US at least) can’t figure out how to deliver at scale.

If Microsoft does launch a Kinect-based ad platform, it would be just the latest upgrade to the roster of advertising options on Xbox LIVE. The company added enhanced display ad capabilities (through Microsoft’s proprietary rich media platform, Silverlight) last year, and even launched 1 vs. 100, a live game-show with commercial breaks.

Of course there are the inevitable privacy concerns, but with Kinect looking like a best-seller this holiday season, it will be interesting to see how it adds to the Xbox’s potential as an ad platform.

So let Google and Apple duke it out in their set-top box “battle” for the living room. Microsoft’s Xbox 360 is embedded in over 44 million living rooms worldwide (as of Nov 2010). If either company really wants to dominate, they’ll have to be ready for war.