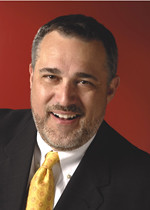 Jeffrey Hayzlett is a social media evangelist. As Kodak’s chief marketing officer, he’s led the company into new territory, reaching out to consumers online and changing the company’s structure in response. He’s hired Kodak’s first Chief Blogger and created the position of Chief Listening Officer, a role he thinks will be required at every major company in the near future.

Last year at the 140 Character Conference, he coined the term twankers. This year, he focused on the emotional technology at work in social media and how to use it.

“People talk about ROI. Throw that shit away. It’s really about your return on ignoring.”

Hayzlett initially took to Twitter to connect with his friends and family: “Then 15,000 to 20,000 people started following me, which is nice.”

But he continues to value personal interactions more than blatant PR messages and sees social media as an amplified way to listen to consumers.

“I have relationships with people online that are deeper than people I’ve known a long time in real life.”

He calls Twitter an emerging “emotional technology” — one reason that Kodak is so well positioned to reap the rewards of social. Photographs are an intrinsically emotional product. Hayzlett uses the act of taking a picture as an example of this. When you spend effort to retake a picture multiple times, “you’re trying to capture the emotion coming through at that time.”

“Any great piece of marketing celebrates the human condition. We have to remind ourselves — it’s the people, stupid.”

In regards to social media, Hayzlett takes the same approach. Creating branded content and sending it into the void serves no purpose. You need to connect with your readers, followers and fans with something they value.

“You’ve got to give somebody something. There’s an unwritten contract.”

That’s also why Hayzlett tries to keep the tone of all of Kodak’s marketing consistent and approachable.

“There’s a piece of you that goes out every single day. For us that’s very important — that’s what we do every day.”

Hayzlett was an early adopter of social media and digital marketing, but now he’s starting to see “even those hardened CEOS and CMOs, they’re starting to get it.”

But he finds the process of listening and sharing to be absolutely integral to business today.

“If those moments aren’t shared, they lose their power.”