Wha wha wha?? That’s right: 2009. As 2008 drew to a close, I jotted down some predictions, but I never hit the “publish” button. Some of them weren’t fully-formed (or even complete sentences!), so I won’t print all of them. But some are interesting. Here are a few:

– “Market share for IE falls below 50% in some countries in Europe.” TRUE according to StatCounter. Here’s a graph: 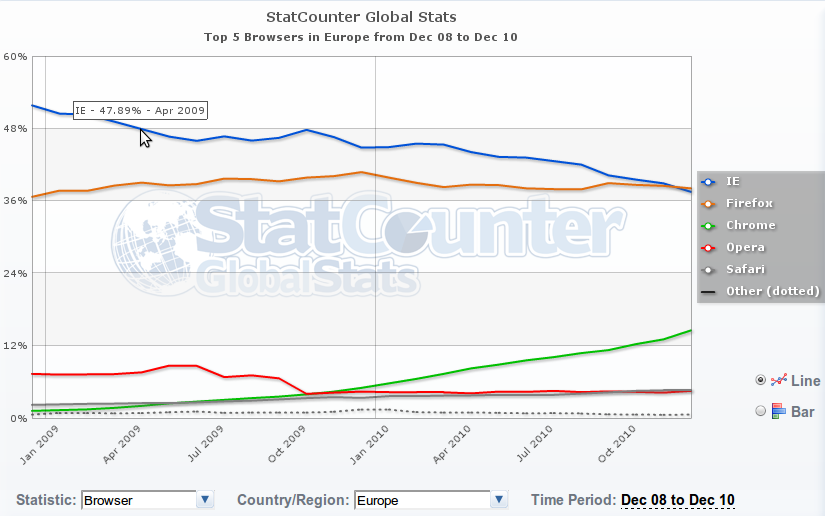 – “Cuil will be acquired by Baidu.” Definitely a MISS. This was an educated guess on my part. I didn’t think Cuil would do well, and someone named Greg Penner was on the board of Cuil and also a board member of Baidu.

– “More people will realize the inevitable truth that Bill Gates saw years ago and that Apple has chased since the introduction of the ROKR: of all the devices in your pocket, the only one you’re not willing to give up is your phone. Therefore, all personal gadgets will eventually be subsumed by your phone. Camera? Already part of your phone. Pen and notebook? Quite close. Video camera? Almost there, give it a couple more years. Car keys, wallet? It will come. In five years, your phone will have fingerprint authentication and be able to start your car or pay for groceries with contactless/RFID chips. It’s all coming. In 10 years you’ll use your phone to authenticate yourself at the doctor, authenticate prescriptions, and store your personal health history, not to mention all your desktop preferences, bookmarks, browser add-ons, and keys to which music you have permission to stream or download from the cloud.” I call this TRUE. Most people now agree that your phone is a personal computer in your pocket. Back in 2008, not everyone realized this.

– “By the way, if anyone figures out how to lick the problem of satisfactory output/input, e.g. heads-up displays or retinal lasers and a virtual keyboard or something with as high a bandwidth as normal typing (and they will), your computer will migrate into your phone. Solving the input/output problem is one of the most important problems for the next decade. Witness the efforts that companies have put into pen-based computing and voice recognition, for example. Re-examine the success of some major products in the new light of better input/output mechanisms:
– Google Maps: direct manipulation
– iPhone: touch and multitouch
– Wii: accelerometer and optical sensors
Smart computer scientists and engineers should be paying as much attention to sonar, inertial, and optical sensing technology as they do to the change from hard-drive platters to solid-state storage.” Um. This one was more of a rant then a prediction.

– Here’s what I wrote back in 2008: “Canny self-promoters plus a few genuine believers will jump on the Facebook backlash early, either for privacy/personal information or for keeping Facebook’s data to itself. But unless the site makes a Beacon-level mistake, Facebook will experience massive growth in 2009, and the Facebook backlash won’t begin in earnest until 2010 or 2011.” Right now it feels true. Maybe we’ll check back after 2011 to see whether that’s accurate.

– “Semantic web technology won’t take off, at least not in the generally-accepted ways.” I’m going to call that TRUE. Remember how Web 3.0 was going to be the semantic web? You don’t hear that meme as much anymore.

– “The most interesting “savviness” test for me will be which of Yahoo, Facebook, or Microsoft let you freely retrieve your email with them into Gmail. Odds are that none will allow it, but if I had to pick one, it would be Yahoo.” A double MISS, because Hotmail did allow POP3 access in 2009. Meanwhile, I believe Yahoo still wants $ 20/year for POP access. I don’t think you can fetch Facebook mail using POP or IMAP.

– “In the same way that millions of people dropped their land-line for a cell phone connection, thousands of people will attempt to go digital by scanning their photos, ripping their CDS, digitizing their old VHS tapes, and scanning their papers.” MISS, I did a lot of those things in 2009, but average people didn’t. The brunt of the analog to digital migration will happen as data is “born digital” from the beginning. Millions of people will have physical photos stuck in boxes that they don’t look at much, plus digital photos on Facebook, Flickr, or Picasa.

– “Google Chrome becomes one of Google’s most successful products.” I think this is TRUE. (Remember, this prediction was less than four months after Chrome was introduced in September, 2008. Back then I was going out more on a limb.)

– “Apple will weather the 2009 recession much better than most people expect as people continue to buy with their heart, not always with their head. More people will realize that ‘Once you go Mac, you never go back.’ ” I’m calling it TRUE. Apple radically outperformed the Dow in 2009. Apple has done very well competing against MSFT in operating systems.

– “Obama’s administration mandates that all federal buildings much use Compact Fluorescent Lightbulb (CFL) technology before his presidential term ends.” I’ve still got at least two more years on this prediction. If the mandate is for LED lightbulbs, I’m still counting it.

– I thought some public officials would start lifestreaming as the ultimate endorsement of transparency. That’s a MISS. Chalk it up to believing that politics would be different after the 2008 election. Oh well.

– “Microsoft will demo a snazzy new phone operating system, but it won’t get much traction, either because a) it’s not as snazzy as the iPhone or b) people don’t trust it to be as open as other mobile operating systems.” Given that this was a prediction for 2009, I’ll call it TRUE. Microsoft didn’t get a lot of phone traction in 2009.

– “Someone not officially associated with Android will work on an “iPhone skin” for Android to make Android look like an iPhone.” TRUE. Looks like that did happen in 2009.

– “Twitter’s 2009 business model consists of premium features that either individuals can pay for (at a nominal rate such as $ 1/month or $ 10/year) or that businesses can set up for self-contained twittering. The premium features include richer API access as well as some new features, such as the ability to save tweets to be posted in the future or periodically.” That, my friends, is a MISS. Although Twitter is now charging for richer access to Twitter data, so maybe not a horrible miss.

– “Hacking of PC clients will decrease, but hackers will shift their sites to web server software. Massive databases of cross-site scripting attacks will be traded in the underground. Script kiddies will launch dictionary attacks. Anyone that writes their own web server software will probably be at a high risk of being hacked.” Overall I’m going to call this TRUE. As individual PCs become more secure, there’s a multi-year trend toward hacking webservers instead. I fear we’re just at the beginning of this.

– “When Android opens premium apps, one of the big controversies will be developers who take great premium-app ideas for the iPhone and rewrite the ideas behind the app for Android, but without the permission of the iPhone developer. Expect flashlights, lighters, beer, farting applications, goldfish, etc.” I’m not sure if this is TRUE or a MISS. I haven’t read a lot of complaints from iPhone app developers about Android app developers stealing their idea and writing their own apps.

– “Multiple people write a bit of JavaScript that site owners can add to their page to guilt IE6 users to upgrade to a new browser. Any browser, just something that was released after 2001 (IE6 was released in 2001?!?). The JavaScript code becomes a viral sensation and sweeps across the net. Whoever authors or hosts this JavaScript gains status around the web. Through the collective work of a bunch of savvy webmasters, SEOs, and site owners, IE6′s market share drops to 5% in some markets by the end of the year.” IE6 is slowly riding into the sunset, but call it a MISS. A few businesses will probably be running IE6 a decade from now for their internal apps.

– “eBay introduces spell correction for search queries which delivers a small boost for their profits.” I’m going to call this TRUE because the search [ipod touc] returns “Did you mean: ipod touch?” at the top of the eBay’s results now.