When I did my blog post about the Stop Online Piracy Act (SOPA) last week, things looked quite grim. The fight isn’t over, but there’s been a lot of great developments in the last few days. If you’re not familiar with SOPA (and the PROTECT IP Act in the Senate), here’s a video that covers the basics:

This internet censorship under SOPA editorial by Rebecca MacKinnon also describes why SOPA would be really bad for the internet.

I also wanted to take a minute and thank everyone who called or wrote their Congressperson to speak out against SOPA and PROTECT IP. As a result of people speaking up in the last few days, a lot has happened:

– Republican Representative Darrell Issa and Democratic Representative Nancy Pelosi came out against the bill. Rep. Issa said “I think it’s [SOPA] way too extreme, it infringes on too many areas that our leadership will know is simply too dangerous to do in its current form.”

– On the Senate side, Maria Cantwell, Jerry Moran, and Rand Paul all came out against PROTECT IP.

– The European Parliament passed (by a large majority) a resolution criticizing SOPA. The resolution emphasizes “the need to protect the integrity of the global Internet and freedom of communication by refraining from unilateral measures to revoke IP addresses or domain names.”

– Sandia National Laboratories, a part of the U.S. Department of Energy, concluded that the SOPA legislation would “negatively impact U.S. and global cybersecurity and Internet functionality.” Sandia joins Republican Representative Dan Lungren, who also worried that SOPA would undercut efforts to secure the internet with DNSSEC.

The response from regular people has been just as incredible. Consider:

– Tumblr made it easy for anyone to call their representative, resulting in over 87,000 calls to Congress. If you haven’t called yet, this page on Tumblr makes it easy to call your congressperson.

– A ton of web users now have this issue on their radar. The Hill noted that “at one point on Wednesday four of the top 10 searches on Google were related to the bill. ‘Internet censorship’ was still the second most searched-term as of Thursday evening.”

– SendWrite offered a way to send a physical letter to Congress. SendWrite eventually had to put on the brakes after over 3000 people submitted letters to send.

I think this overreach on SOPA will actually make the internet community much stronger. Let me tell you why.

The forces in favor of SOPA have been outspending the tech industry almost 10 to 1 in Washington, according to a recent article in Politico. Here’s an image from that article that illustrates the vast gulf in spending: 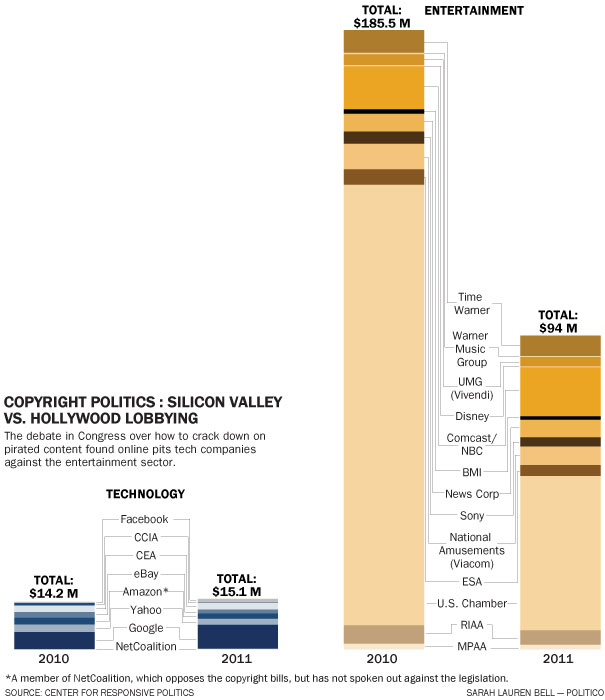 And members of Congress are not always the most tech-savvy: the Congressional Research Service tallies only six engineers in Congress. But if you look further out, the picture is quite different.

At least, I thought we’d have to wait 20-25 years before a critical mass of people would defend the net. But SOPA has brought that day a lot closer. SOPA galvanized the tech community, from start-ups to venture capitalists to the largest web companies. SOPA was an unexpected shock and a wake-up call. Well, guess what? Now the internet is awake. And I don’t think it’s going back to sleep any time soon. We might need to rally again in the near future, but we can do that. The internet learns fast.

What you can do?

– Sign up at American Censorship to send a note to Congress and get updates.
– Call your congressperson with Tumblr’s easy web page.
– I believe anyone inside or outside the United States can sign this White House petition. If you’re outside the United States, you can also sign this petition.
– Follow groups like the Electronic Frontier Foundation (EFF) on Twitter.
– Sign up with United Republic, a new organization dedicated to the larger problem of money in politics.
– Sign up to have Senator Ron Wyden read your name on the Senate floor when he filibusters against this legislation.