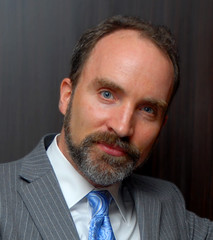 For the last 10 years, David Rogers has been the executive director
of Columbia Business School’s Center on Global Brand
Leadership, focusing on branding
issues for researchers and executives. Three years ago, the Center began the BRITE conference, an event focusing on how technology is
transforming brand building. His latest book, “The Network is Your Customer: 5 Strategies
to Thrive in a Digital Age,” will be out this fall.

This year’s BRITE conference begins Wednesday. I caught up with David to discuss what he’s got on deck at Columbia this week, and how brands should work with technology today.

How did the BRITE Conference get started?
It started in 2008, to center on global brand leadership and how innovation and technology are changing the ways that we build great brands. We bring together smart people and emerging trends. It’s a mix of marketers, entrepreneurs and big thinkers in the space. It’s a different blend of thinkers and doers that comes together than during your typical conference. As an academic institution, we combine leading edge practices with new thinking. We don’t have a product to push. It’s about building a community.

How has technology changed brand building since you started at the Center for Global Leadership?
Over the last 10 years, both brand and practice have evolved. Before then, traditional branding was about logo and design. When we started the Center, it was very much thinking about customer experience and innovation and how they shape brands. What we saw over the last few years is that the space in which brands are created is very much influenced by digital media. Now we’re all living our lives within digital media. There’s not really a distinction between offline and online lives.

Every company, whether you’re designing shoes or you’re a B2B software company, you’re dealing with digital. If you’re going to create the right products and relationships with customers, you need to understand the dynamics of customer networks.

Can you talk a bit about how you define a customer network?
It’s the network of current and potential customers. My book, “The Network is Your Customer,” puts forward this idea, that businesses have to think of their customers as networks. The digital links between customers have transformed the relationship that people have with each other and with businesses. It used to be that if a company had a loyal customer, they’d want to get the customer from being aware to being interested to desiring and purchasing products. Now there’s an additional stage. You want the customer to not only become a purchaser, but an advocate. They go out and talk to others about their experiences. Now customer service can have much greater reach. The flip side of it is that if your customer has a bad experience they can share it with many more people than they once could.

Can companies always handle that bad word of mouth online? Or are there companies that shouldn’t be inolved in social media at all?
All media is social media at this point. I wouldn’t make a blanket rule. Maybe a government military contractor with high priorities of confidentiality shouldn’t use Twitter. But they would still be using social media within an intranet, to work more effectively with their partners, let’s say.

What about companies that deal with politically charged products?

I don’t think that question is any different than before the rise of digital media. That’s a communications challenge for the brand. There are ways of addressing that. No company is going to change all of its business practices to meet every wish of every person. A company needs to decide who it’ key stake holders are and advocate for them. That might mean a company like BP saying “We’re going to change some of our business practices.”

Other companies approach it in different ways. The one thing that doesn’t work as effectively anymore is just putting up some fluff. You can’t just buy a lot of ad space and expect your message to resonate. You have to have some actual actions to support your position. You can’t sustain the kind of two-facedness that you could to a degree in the past, just because the power was concentrated in those who could pay for mass media.

How do companies prevent flame wars?
One thing is you want to be monitoring what’s going on and what’s being said and the visibility. Not all flame wars are equal. Some will fizzle out, some will not. The ones that don’t fizzle out, people have strong reasons for getting involved in. It depends on how severe the crisis is and whether your customers are committed. With Toyota, for example, it would have been much worse if they didn’t have customers who had positive experiences with the company. There’s no single response.

Anything surprised you over last 10 years?
I don’t know that I’ve been surprised, but it’s been amazing to see how quickly the use of digtal media has changed so much of our lives that we almost don’t even think about it.  Even two years ago, niche phenomenon had not become part of our environment, the way that email has. But now we don’t even think about email. It’s sort of like speaking. Very rapidly, a lot of these new tools have been adopted.

I think very soon we’re going to see things that are about product and service. Like Makerbot, one of the companies that is speaking at BRITE this year. A lot of these technologies that seemed far out and fringe are really quickly becoming part of the assumed landscape. The pace of adoption has been amazing to see.

What happened in the past two years to accelerate things?
Impacts that have been inherent in the architecture of the intrnet for 40 years and the worldwide web for 15 years, have become incredibly prevalent in the last three years or so. People talk about Web 2.0, but it’s really just a qualitative shift. The idea of everyone having a voice on the internet was inherent in the structure of the web, even before everyone had it. But we reached a tipping point when the tools became sufficiently easy to use, and we’re starting to see the impact more. This is an actual transformation of our society.

So what comes next?
I think we now have enough of a body of knowledge to really see how our customer networks are transofrming business practice. It’s not just about marketing or PR, we’re starting to see how this is affecting everything. It’s not in the ghetto — the impact has really spread far and wide. That’s going to be really exciting to watch.


View full post on Posts from the Econsultancy blog