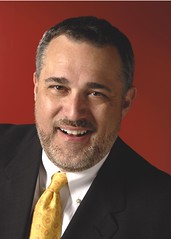 Thanks to the rapid growth of digital cameras — and camera-equipped smartphones — traditional camera makers have had to make a lot of changes over the past few years.

Eastman Kodak Company, for instance, went from selling $15 billion of
film five years ago to less than $2 billion last year. To counter that
shift, the company is working hard to transition from the analog to the
digital world.

One person who has been at the forefront of that shift is the company’s
Chief Marketing Officer, Jeff Hayzlett. Kodak now does 70% of its
business in digital. In addition to marketing the brand, Hayzlett has
taken charge of changing the mood of his company. That campaign has
taken many formats, including multiple guest appearances on NBC’s
Celebrity Apprentice, where Kodak is a sponsor and participant.

Hayzlett’s long been a proponent of social media, and has used the
medium to change the way Kodak does business. From crowd sourcing
product names and features to various customer service initiatives,
Hayzlett has been so bullish on social that he created and hired for
the position of Chief Listening Officer to keep track of the brand
online.

I’ve written about Hayzlett before, and the last post I did, about
Hayzlett’s notion of “emotional technology,” sparked a debate in
our comment section that questioned the validity of valuing listening
above sales. With Hayzlett’s book The Mirror Test coming out this week,
I decided to track him down and ask a few more questions on the matter.

What is “the mirror test”?
Well, for the last couple of years, every business has been doing nothing but cutting and cutting and cutting. And they’ve been getting really good at it. The mirror test is about growth and about how to get your business back into a growth mode. That requires a couple of different tests. The first test is really about proof of life. Will your business fog the mirror? Now if you’re not growing in terms greater than what you’re losing, then you’re dying. So, a lot of businesses forget to make sure that they look at the fundamentals. And this book is about looking at the fundamentals, and then how do you adapt it to a much more digital and rapid world.

What about your approach to social? How do you measure growth there?
I always tell people when they start talking about ROI, well, what’s the return on ignoring? Some people freeze up or companies freeze, because they’re so busy trying to measure rather than do. The biggest ROI measurements that you need to know about are these three. One: Is your business growing? Second: Are you expanding your margins? And then third: Do you have customer satisfaction? If you’re heading in those ways at the pace that you need to, then that’s really the only measurement you need to have.

It seems like a lot of companies are generally promoting their business category right now, rather than specific products. Do you subscribe to the thought that a rising tide raises all ships?

If you’re the category leader (which a company like Kodak has been) or if you’re some other major brands which I’ll not mention, I mean, that’s helpful. But again, you know, you’re making the assumption that those particular campaigns are only focused on a broader message, and they really aren’t. They’re focused very specific items — on a very specific camera device, maybe.

For Kodak, they have the “share” button, and this is a feature that nobody else has. So, to have a product that automatically eliminates all your time constraints, which is one of the biggest hassles, is a pretty big deal. And it uploads to Facebook. It uploads to YouTube. It uploads to your personal email accounts and to your friends’ email accounts. I mean, that’s massive. Right?

The key is to know exactly what your product categories are, the areas in which you wanna play, and then specifically get to the value proposition around those areas to the people you wanna reach. I’m not a believer in a lot of brand advertising, because a brand is nothing but a promise delivered. So, if I’m outlining what the promise is I’m gonna do for the customer, then that’s the kind of message I wanna take out there.

I wrote a post on Econsultancy about your thoughts on “emotional technology,” which sparked a debate from our readers, about the effect of social media on sales. Do you think social can directly driving sales?
It can. I mean, we’ve launched products and driven products solely through social media. So, it just depends on how you wanna use it. Or take a company that I’ve been working with. You know, 40-something percent of the conversations going online were negative or about product complaints. Now it’s less than 6%, because we got engaged. So, that’s a direct benefit. I mean, you know, there’s higher customer satisfaction and you’re turning people who have complaints into evangelists for you. That’s fairly specific. I mean, that’s not some warm and fuzzy kind of thing.

How do you react? Or if someone brings up product features and functionality. Then you want product marketing involved. So, you don’t have time for all people to be listening for all things, but you do have time to have someone act like an air traffic controller and help you route those conversations into the right people.

How much does social media amplify people’s ability to interact with a brand? Is it just more of what we had before or is it different?
No, it puts a face on it. I mean, just try to find somebody on a corporate web site. Go to any company, almost any large company, especially a large company, and try to find the name of a person or their email or, gosh forbid, what they look like. Now with social media, that’s what it allows you to do. Put a person with the company.

It’s going back to the days of old when everybody knew your name when you were the customer. Now we know your name, we know your picture, and by the way, you know ours. I can’t think of anything better. With social media, customers don’t have to press 1 for this or hit # for this. They’re sending me a direct message and giving me their ideas or complaints or their praise.

What about a show like Celebrity Apprentice — what is Kodak getting out of that?
Well, I mean, it’s OPM. I’m a big advocate for Other People’s Money. So what I mean by that is where you make a small investment somewhere, but then leverage the asset for your own benefit and a greater audience. Things like Celebrity Apprentice or golf tournaments and branded entertainment, when using the right property for the right product or message, are phenomenal. And they have exponential benefits to them — if you’re fully deploying the asset.

How can big branded partnerships and events change a business?
Well, for starters, it certainly changes the mood of your employees and your team, because they see you participating in big things. When you get a show like Celebrity Apprentice, which has been one of the top rated television shows, that helps. It makes you feel like you’re part of something bigger, and it transforms the mood. At the same time, it makes you relevant to the customer, because you’re out there in different ways, other than just straight advertising. I mean, advertising is good, but if I can make it part of entertainment or do it through somebody else’s recommendation, I actually get a bigger uplift.

Can you talk about the concept of “the 118” that’s in your book?
Well, that is redefining the elevator pitch. Elevator pitches have grown into 30 and 40 page PowerPoint slides, when an elevator pitch was supposed to be succinct and to the point. So I’ve redefined it as the 118.

Any advice on how to do that?
Have a very good hook to grab somebody’s attention, but close it quickly with being succinct in your value.