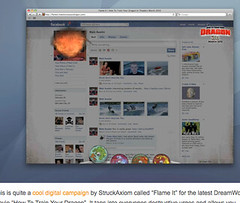 For a long time film studios have kept a subset of films away from critics before their premiere. The logic is that these films — from horror pics to big budget thrillers and comedies — might get bad reviews and will fare better going directly to the public.

The feeling is that the approach might at least help these films get a strong opening weekend. And now studios are relying on social media for that purpose. But as Hollywood is increasingly trying to get people to see big budget films with dwindling marketing budgets, social media is getting more of the credit and blame for box office success or failure.

Take Disney’s new cartoon “How To Train Your Dragon.” According to The Washington Post:

“It spent $160 million to $175 million to market “Dragon,” then had to
revamp its promotional materials and TV commercials right before it
opened. Analysts say its campaign fell flat with audiences.”

In today’s media environment, marketing efforts are increasingly pegged to opening weekend box office results. Gordon Paddison, who led the online
media campaign for “The Lord of The Rings” films, tells The Post:

“If you don’t open strongly, it really hurts, so there’s a high level of
attention to efficiency. Everybody’s trying to do more with less.”

“How To Train Your Dragon” was expected to bring in $65 million to $70 million in its opening weekend. But the movie only brought in $43.7 million.

The holy grail for film studios is to turn individuals into brand
evangelists on social media, but they’ve had varied success rates with that. Hot Tub
Time Machine, for instance, created
great buzz online leading up to the film’s premiere, while many
people attributed Bruno’s
lagging opening weekend sales to negative commentary from the
twitterati.

And two scientists have put some numbers behind the idea of the Twitter success indicator for films. According to the LA Times:

“Sitaram Asur and Bernardo Huberman, two social computing scientists at
HP Labs in California, say computational methods using Twitter feeds can
predict with as much as 97.3% accuracy how a movie will perform
on its first weekend of release.”

In a tight financial environment, social media holds a lot of promise. Especially considering that Hollywood reportedly cut ad spending by 8% to $4.39 billion in 2009 (after cutting budgets 3% in 2008.) according to Bernstein
Research.

But digital venues are not necessarily going to come cheap. The YouTube homepage, for instance, is seen as a good way to reach people online, and The Washington Post notes that Sony Pictures ran a “Death at a
Funeral” placement there this week that cost an estimated
$250,000.

Meanwhile, the real-time nature of social media means that companies are having to totally revamp their strategies in a short time period. How To Train Your Dragon eventually got some positive recognition for its online efforts, but that kind of creative turnaround doesn’t come cheap.

Blaming social media for a film’s failure is a bit misplaced — and ignores the fact that the content of a film also has something to do with people seeing it. But as much as things are changing in the movie business, a lot is staying the same. Howard Bass of Ernst & Young
Global Media & Entertainment tells The Washington Post:

“Studios are challenging marketing budgets and doing more
experimentation, but TV continues to take the major share on views it
reaches the biggest audience.”