I’ve been reading a lot of the coverage of the Search plus Your World launch and I wanted to share my story and then clarify something.

I love to stay up until early in the morning playing Werewolf. In early December I went to a journalism conference called “News Foo Camp” in Phoenix and played a lot of Werewolf. When I got back, for some reason I searched for [werewolf] — maybe I was thinking about making a custom deck of werewolf cards. Because I was dogfood-testing Search plus Your World, this is what I saw: 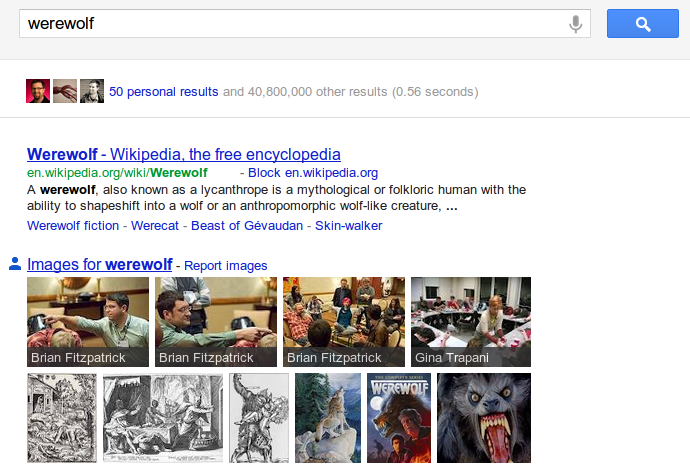 In the top row of pictures, you’ll see a bunch of people playing werewolf, including a picture of me as the werewolf in the top-left image. Doing a generic search like [werewolf] or [photos] and getting back a picture of you or your friends is a pure, magic moment.

Let me tell you how it happened. I have Brian “Fitz” Fitzpatrick in a circle on Google+, because he’s in charge of Google’s Data Liberation Front and he’s an all-round awesome guy to boot. Fitz published an album of 25 Werewolf photos shortly after the conference. Okay, but I’m only in one of the 25 pictures; how did Google return the picture of me first? It turns out that Brian had tagged me in that single photo.

Once you know the trick, it might not seem like magic anymore. In fact, this is the “things just work” experience that everyone in the tech industry strives for. But when I searched for [werewolf] and got back a recent picture of me playing werewolf, it did seem like magic right then. I suspect as more people take Search plus Your World out for a test drive, they’ll quickly experience similar magical “Aha!” moments like I did.

I was reading some of the comments on tech blogs, and I wanted to clarify something: Search plus Your World does surface public content from the open web, not just content from Google+. For example, look back up to the top-right image from my screenshot above. That’s actually a werewolf photo that Gina Trapani took and it’s hosted on Flickr, not Google.

Here’s another example. If you follow the excellent and erudite Jennifer 8 Lee and search for [general tso’s chicken], Google can surface this high-quality thread from Quora:

By the way, that’s a fantastic thread for Google to highlight, since Lee literally wrote the book about General Tso’s Chicken. It’s exactly the sort of “just works” user experience you’d want.

It’s not hard to find content shared on other sites. For a search [grand unified theory of snack food], Paul Buchheit shared a link on FriendFeed, and Google can highlight that:

Or if I search for [connectbot], here’s a link that Brad Fitzpatrick shared on Live Journal:

(Yes, we do have both a Brian Fitzpatrick and a Brad Fitzpatrick at Google. People sometimes mix them up, but they’re different.)

I hope that helps to make my point. Search plus Your World builds on the social search that we launched in 2009, and can surface public content from sites across from the web, such as Quora, FriendFeed, LiveJournal, Twitter, and WordPress.

The team should be finishing the rollout of Search plus Your World in the next day or so, and I hope you enjoy it. Remember, to see the new results, you’ll need to be signed in with a Google account and search on google.com. Give this new feature a whirl: once you see how much better personal search can be, I don’t think you’ll want to give it up.