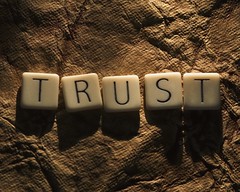 The social graph is something that the digital world is struggling to understand right now. How important are the connections within your digital social circle? Who are the most important connectors in your graph? How far does influence travel online?

Well, according to a study from Invoke Solutions, it’s still real world friends that hold the most sway with consumers online. And while Facebook has made a niche for itself by fostering online relationships between people who are friends or know each other offline, on Twitter there could be trust issues.

According to Invoke, the most trusted information online is posted by people’s real world friends. Blog posts by said friends were more likely to be trusted “completely” than posts on
Facebook. But posts on Twitter were even less trustworthy.

Those numbers were still higher than brand messagins. Blog posts from brands scored 11% complete trust, Facebook posts from companies had 9%, and brands posting on Twitter had the complete trust of 6% of respondents.

That’s to be expected. But consumers also trust posts from their friends more than professional bloggers and community members. On Twitter, independent bloggers only inspired 5% total trust. And fellow community member comments only ranked slightly higher at 8%.

That’s especially interesting in light of the fact that most people on Twitter make a habit of following people they don’t know in real life. If Facebook is a venue for
friends and acquantances to interact online, Twitter users
activiley seek out messages from experts and bloggers.

That seems to be the value that Twitter adds to the Facebook status messages that predated its existence. But if people don’t trust those messages, it changes the power structure of Twitter’s social graph.

Especially considering that so called influencers are sought after at such a premium online, this study turns that notion on its head. It’s understandable that people would trust their real life friends more than strangers online, but when brands are more trustworthy than bloggers and community members, that seems to be a sign of incredibly strong marketing or trust issues on a platform.

But then again, it probably doesn’t matter what I think about this. Unless you know me in real life.