We’ve wrapped ILM West in San Francisco this week — another terrific show. Lots of great stuff. Thanks very much to the 50+ speakers, 32 sponsors, nearly 600 local leaders and various #ILMWest Tweeters who participated.

Our goal with all the shows, of course, is to provide “context and contacts” for executives, entrepreneurs and investors building the local space. The testimonials now pouring in make us think that we were quite successful.

Internally, insights from ILM thought leaders. and the show’s in-depth research will definitely help the analysts from our six research programs shape the next waves of local innovation. Here are some of my personal takeaways:

1. No expectations of a runaway local winner. Some years, we think we’ve ID’d the next big thing. But this year, nobody really thinks that Facebook, Groupon, Living Social, Yelp or FourSquare is going to disrupt and run away with the entire market. This is one fragmented space. Google remains the only wildcard.

2. Time to rethink digital and traditional media separation. The New York Times, Washington Post, Morris and others have re-integrated their prints and online units. They’ve seen the light from Digital First. It gets better. The San Diego Union Tribune just named Mike Hodges, its digital leader, as president of the entire operation. But as Clark Gilbert points out, it is still important to delineate where it makes sense to integrate, and where it makes sense to keep operations separate.

3. Hail to the Phone! Or at least, to phone calls. As Marchex’s Matthew Berk brings up, the technology aids for search and discovery don’t point to replacing phone calls for leads. They point to reinforcing and supplementing phone calls. “The explosion of mobile is about being call-ready,” he notes.

4. There’s life in video and audio formats as add-on channels. We heard a lot from broadcasters at the show (i.e. Clear Channel CEO Bob Pittman). What really struck us is what a great local promotional add on they are to Internet verticals (i.e. IHeart Radio). That’s mostly what they are.

5. We’re all in the games business – at least, a little bit. Kara Swisher disagrees, but games are being deployed in many walks of local, with new demographics, added frequency and stickiness. Just looks at what GrubHub is doing. It is something that leads providers learned years ago.

6. The deal platforms appear to be interchangeable, with little changing costs. We’ve been impressed by the development of white label deal platforms. But it was kind of shocking for us to see several major media outlets give so little credit to their platform providers. 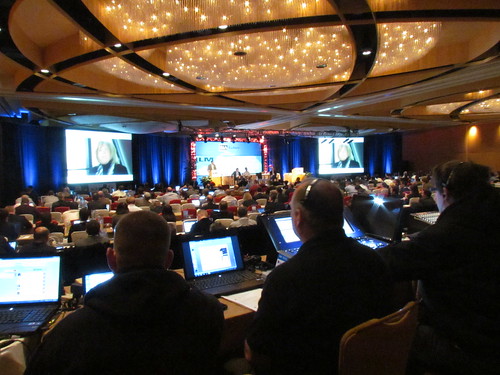