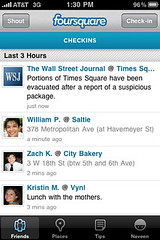 The Wall Street Journal may have a long way to go before its new New York section becomes a must-read, but it’s making some headway with social media.

When the newspaper launched its new section last month, it also announced a partnership with Foursquare. And while one of my colleagues might disagree with me on this one, I think it was a smart move. And today proved why.

“It’s easier to put the cart before the horse by betting on various
platforms before a workable strategy is in place, but unfortunately
print publishers will need to do the difficult if they want digital
success.”

I’m not advocating that every media brand start creating meaningless badges. That isn’t going to bring in revenue or readers. However, it’s important for news publications to prove they know how to use new technologies. And having a Foursquare partnership for a brand is not the same as trying to be edgy with a Chat Roulette marketing strategy.

Of course, once multiple brands are using a new service for the same purpose it will lose its usefulness and start to sound like noise. But this afternoon, the Wall Street Journal was helpful for Foursquare users that use the service, posting the following note:

“Portions of Times Square have been evacuated after a report of a suspicious package.”

Newsbriefs like this in the city you live could quickly be welcomed by consumers using location-aware apps. As Mediaite points out in its list of Five Things The WSJ Can Do To Make Its ‘Local’ War With The
NYT Matter, the paper already has one base covered with Foursquare:

“This, or something like it is probably going factor largely into what
local news looks like in next 5 years, so if the Journal can do it right
they will be one step ahead of the game.”

News briefs via Foursquare may not immediately sell papers, but New York readers are going to read the paper that they feel is most pertinent to them, and this is an easy way to provide utility.