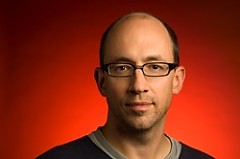 Today Twitter is going live with its long anticipated ad platform. As we’ve already written, the ads will launch as a key-word based search product. But as Dick Costolo, the company’s COO explained today at Ad Age Digital today in New York, Promoted Tweets will eventually appear in every user’s regular Twitter stream.

How will the company avoid spamming its users? Twitter is hoping that a little measure called resonance will help.

Starting today, companies and indivudals can purchase promoted tweets from the main menu on Twitter, pick search terms, and associate them with individual tweets they’ve already published. Those ads will show up when users perform a search on terms where ads have been purchased.

Costolo plans to “use the learnings from search and leverage them as we start to think about how we expand the program.”

For months Costolo has been foreshadowing that Twitter’s ad platform will be “awesome.” He thinks he’s delivered on that promise:

“One of the really cool things I love about this platform, is it combines earned media and paid media into one space.”

Part of that plan means that Twitter will not be charging marketers when their promoted tweets are retweeted.

“We think the ability to target this real time interest graph can be more
compelling than other kinds of targetting.”

That’s also how Twitter plans to avoid having its ad platform turn into a method of spamming its users. The company has created a metric called a resonance score that tracks how effective these promoted tweets will be and how they engage with those tweets. If people aren’t interacting with paid tweets, they will start to disappear from the platform.

“Brands and companies will not pay for promoted
tweets that don’t resonant with users. And users won’t see those tweets.”

Currently, Twitter’s ad platform’s metrics are open ended, but the company will be tweaking it as it sees how people use and react to sponsored tweets.

“It’s probably gone live while I was onstage here, we will start to see what resonance means over the coming weeks and months.”

Initially priced on a CPM basis, Twitter will likely transition to more of a ROI model as that happens. Costolo insists that he wants to use resonance to avoid forcing  marketers to obsess about clicks.

Once promoted tweets are live in search and Twitter sees how they perform, the company will begin syndicating purchased tweets into the Twitter stream across platforms. The company will be splitting promoted tweet revenue with third parties that deliver tweets to consumers, but it will announce the exact revenue share percentage tomorrow
at Chirp, Twitter’s developer conference in California.

It remains to be seen how users and businesses will use and react to these new ads. But Costolo says:

“My hope is that these will enhance the user experience in a significant way.”