Get More Customers By Improving Your Search Engine Rankings

Do you want more phone calls, more customers and grow your business?

You know how some local Bromley businesses struggle to get found on the internet when their potential customers are searching for the services or products they provide? We solve this!

Blue Square Management are a local SEO company in Bromley, Kent, helping businesses like yours get more phone calls, leads and customers.

We do this through our internet marketing services, which helps improves your business website’s rankings in the search engines, such as Google and Bing. It doesn’t matter how large or small your business or company, if you cannot be found for the products or services that you offer, your business will NOT grow! Whether you a local Bromley accountant, landscape gardener, locksmith, lawyer, an online retailer or have tile shop, you need to be found by people when they searching for your products or services.

We help you get found! 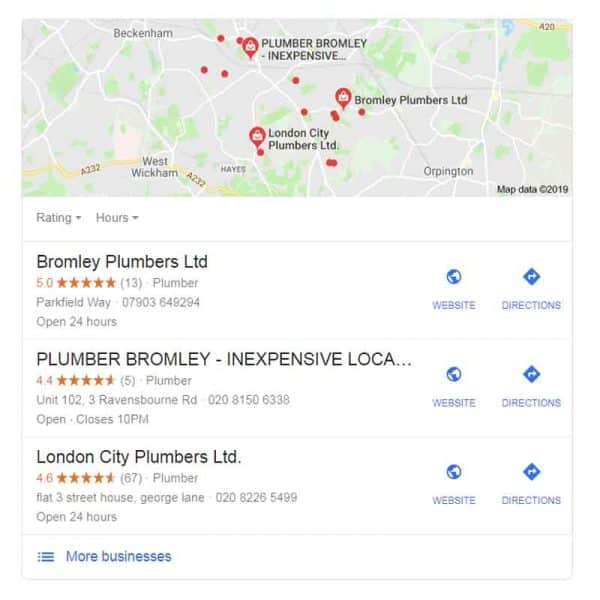 As a local Bromley business owner, all you are really interested in is getting more customers, client patients or selling more products. Getting leads, phone calls and sales is what local SEO is all about. Getting your business in Google Maps!

If you want to promote and market your business to the next level, then check out our Bromley digital marketing services.

Get Found When Your Potential Customers Need More Most

Local SEO is about getting found in Google Maps when someone searches for the services or products that your provide in or near the Bromley area. By using our digital marketing expertise, we help improve and grow your local online presence. Helping Google understand that yours is the best local business for those products or services you offer.

We are a team of local Bromley SEO Experts

We work with local Bromley businesses, large and small, helping them improve their Google rankings and ultimately get more phone call, sales and customers.

Local SEO services therefore include, but are not limited to:

It all starts with keyword research and finding the search terms that people are actually looking for! That are relevant to your business and help get you customers or sell products.

With our on-page SEO, we will optimise your website for Bromley, including your local address, and other local areas that you offer services

GMB is an essential part of any local SEO campaign. If you have not claimed your listing, we will claim it. We will fully optimise your listing.

We will add your business to directories and citations. In Google’s eyes, this adds more trust to your business.

We properly set up Google Search Console and Google Analytics on your website so you can see how well your online marketing is performing.

Using our network of authoritative publishers, we can syndicate digital press releases to promote and market your business

Using social media is an essential part of any online marketing strategy. We create social profiles, syndicate your content and get your message out there.

If required we can create high quality content that is relevant to your local Bromley industry or niche, that attracts potential customers

Do You Want More Local Bromley Customers, Clients or Patients?

What Our Clients Say About Us

Bromley is the largest London borough, covering 59 square miles, with its main town also called Bromley. It is located on the border of South East London and Kent. It lies 12 miles from central London, only 15-20 minutes away by train. With excellent schools, good sized houses and much green space, it is ideally suited to families. HG Wells, Charles Darwin and David Bowie all in Bromley.

The majority of Bromley’s shops and restaurants are situated around Market Square, East Street and High Street North. Many of these shops are located in The Glades, a covered shopping centre. The town centre also has its own large theatre, The Churchill Theatre, which hosts many national touring productions.

The centre of Bromley has a plethora of places to eat and drink in. From fine dining restaurants, such as Indian Essence and Chapter One to Madisons, a posh burger restaurant. Pubs and bars are a plenty too.

Local amenities include 14 libraries throughout the borough, sports centres including the Pavillion Leisure Centre and many outdoor facilities, including playing fields, parks, football and cricket clubs and golf courses.

You can learn more from the Bromley Council website here.

Be kept up to date with all the latest news, hints and tips.