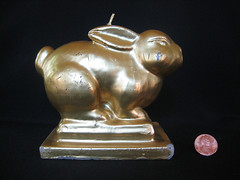 Rob Walker is best known for his writing for The New York Times magazine and his book Buying In, which explores the relationship between consumers and objects.

As an offshoot of that, he has also been working on a project called Significant Objects, which resells inexpensive thrift store finds on eBay at a steep markup. What’s the trick? Stories that connect consumers to what they may otherwise classify as random tchotchkes.

Writing about murketing for a living, Walker spends a lot of time thinking about what attracts people to objects. This offshoot project got started with a broken mug that Walker purchased on a trip to Baltimore with his future wife. It wasn’t expensive, but it held a lot of value for him, and when it broke he was very upset. Speaking at the PSFK Conference in New York, Walker explained:

“I thought about this from the point of view of the object. This cup had my story foisted on it.”

Working together with the author Joshua Glenn, Walker collected a group of cheap items and started talking with writers about creating fictional stories about them.

They posted the stories and the items on eBay and found that every single object sold for more than it had been purchased for. In fact, many were sold next to the exact same object. But showing that they were uploaded by Significant Objects gave these things more value. Because they were tied to story that people connected with, even though the tales were all fictitious.

Marketers are always looking to tell stories about products that make consumers connect with objects and want to purchase them. In Walker’s case, he employed fiction writers — well-known and not — to tell made up stories about tchotchkes purcashed at low values. Some of them were interesting. The bunny candle above, for instance, is connected to a Neil Labute story. It sold for $112.50 and will soon be on view in an art gallery in New York. It was purchased for $3.

None of these items had much intrinsic value. Some, according to Walker are even classified as insignificant objects. Who are the people who purchased these objects? Says Walker:

But tying the stories to these little items also grew the value of the fictional tales.

But Rob Walker is not the only one who can create value out of plastic objects. Take this eBay listing for a “Haunted Seductrist Sadistic Ruthless
Porcelain Doll,” for instance. It recently sold for $100. Other dolls on eBay sell for a fraction of the price. But someone seems to have liked the story that went with this one.

These examples prove that the value of a product lies in the story connected to it as much as how much it costs to produce and sell. And the more connected to a product an individual feels, the more likely they are to spend money on it. Even if others consider it to have little to no value.

Meanwhile, the mark up for Significant Objects was around 2900%. As the site explains: