More than ever, it’s crucially important for brands to be timely, relevant and engaging. In the first truly digital UK general election, we’ve already seen that the main political parties could do a lot more to improve their websites and online campaigns. But what about companies?

Here are some examples of brands who have jumped on the election bandwagon, by launching topically-themed marketing campaigns and products.

Tyrrells Crisps has launched Political Potato Crisps, a range of limited edition gourmet crisp flavours based on the three parties, which will be sold at Selfridges during election week. A “Hung Parliament” flavour, combining all three flavours is also in the works. Tyrrells polled 2,000 people across the UK, encouraging them to vote on their favourite flavours.

Verdict: 2/10 – Another gourmet crisps brand (see below!) is doing a similar campaign and a quick Google search for “political crisps” provides links to the rival brand. In addition, the website itself provides little opportunity for the user to further engage with Tyrrells, beyond signing up for their newsletter and visiting their Twitter and Facebook page. 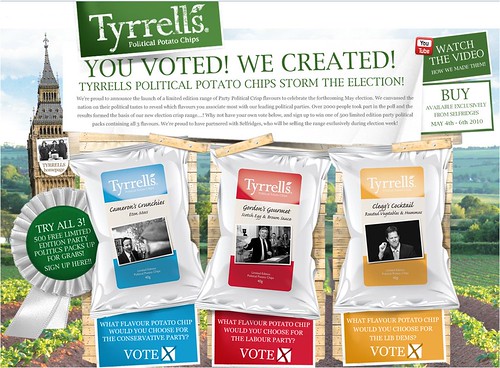 The Real Crisps Company has launched a similar campaign by launching limited edition packaging for their “Handcooked Sea Salt Politi-crisps”. The dedicated microsite allows users to vote on their favourite packaging in their area, view user-generated videos, enter a prize draw and see “regional poll results” in their area. A live Twitter feed on the page also pulls in comments from Twitter, and buttons on the page allow the user to share content via Facebook, Twitter and through email, something the Tyrrells page doesn’t offer.

Interestingly, all three of the different Politi-crisps varieties are the same flavour, Sea Salt, perhaps revealing a broader message about the political parties more generally…?

Verdict: 5/10 – The campaign is very similar to Tyrrells above, so scores low on originality, but a quick Google search reveals significantly more coverage, including links to blogs and Flickr. The dedicated microsite allows for slightly more opportunities for consumers to interact with the brand and share content via social media channels. The real question here, though, is would you really want a snack with either Gordon Brown’s, David Cameron’s, or Nick Clegg’s face on the packet?

Ikea has launched a website, called Domestic Policy, where consumers can find kitchen designs inspired by the three main political parties. Scrolling over the different parts of the Brün, Kamerun and Kleggi kitchens reveals different in-jokes about each of the parties. For example, the “Presse” products warns the user to “use sparingly and carefully”, revealing an insight into Gordon’s Brown’s notoriously tetchy temper. The Kamerun kitchen features a shiny “Etontabl Bullingdone” table, whereas the Kleggi (“this week’s most popular kitchen”) features a “Vincekabl Tidy” for keeping economic mess at bay. The site then directs users to design their own kitchen on the main Ikea website.

Verdict: 7/10 – For sheer wit, creativity and originality, this site gets a respectable seven out of ten. As content is king, it’s unsurprising that this viral effort is getting a few Tweets, mentions on blogs and in the traditional online press. 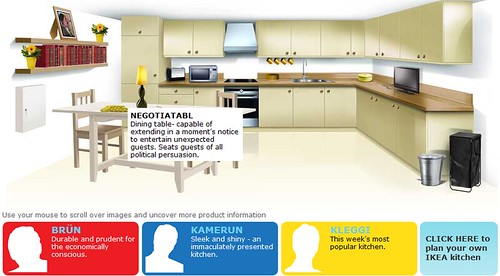 Marmite. We all know you either love it or hate it, and Marmite has taken this further with this spoof election viral. The campaign features dedicated Facebook pages for The Love Party and The Hate Party, political broadcasts on YouTube, as well as radio, TV, poster and press ads aiming to get the public to vote online.

Ironically, the YouTube videos for The Hate Party include comments from users who appear to be engaging in somewhat serious election banter. Additionally, Nick Griffin also appears to be riled by the ads, accusing Unilever of modelling The Hate Party on the BNP (Unilever have clearly stated that there is no link between Marmite and the BNP).

Verdict: 9/10 – Anything that appears to irritate Nick Griiffin gets a thumbs up from me… more seriously, Marmite have done a good job of further developing “you either love it or hate it” theme, as the ads are innovative, engaging and obviously get consumers talking about the brand.

Yes, “Election Manifesto” wasn’t the real name for this innovative paid search campaign from the naughty goods retailer, but the real title was a tad NSFW…

As some might recall, Ann Summers also targeted the key words, “BA Strike” a few months ago, and they’ve done it again with the election. A quick search for “David Cameron” on Google results in a couple of cheeky ads from the adult retailer:

Ann Summers even has a dedicated landing page, outlining their “policies“(again, NSFW).

Verdict: 9/10 – Ann Summers’ paid search ads are timely, opportunistic and funny, and the real political parties could do well by learning a thing or two.

Seen any other examples of election-themed marketing? Love or hate these campaigns? Let us know which marketing campaigns you’d vote for in the comments below.