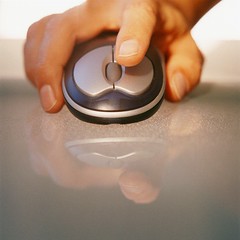 Online advertising has long been measured by clicks. But as advertisers try to make a case for display and branded advertising online, its become fashionable to discount the importance of the last click-through. Trouble is, it looks like most advertisers are still relying on click-throughs to measure their online campaigns.

According to new survey from Chief
Marketer, the click is by far the most important measure of ad performance for online marketers. 60% of those surveyed reported that they rely on clicks to measure ad effectiveness. Less than 2/5  measured overall return on investment (ROI).

And despite the fact that display
advertisers
have been hard at work trying to discount the last-click through rate as
the final say in online measurement, these answers are roughly the same
as last year. 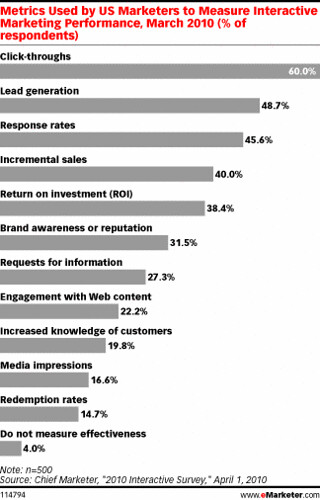 Last year, Chief Marketer concluded that the numbers meant marketers were only paying lip service to ROI metrics. Well, it’s been a year and it doesn’t look like much has changed.

According to David
Hallerman, senior analyst
at eMarketer:

“Marketers’
familiarity with clicks is only one factor that contributes to its
continued usage as the top metric. Clicks are easy to count, too, and therefore an
inexpensive metric to gather.

Of course, other metrics in these studies are stand-ins for return on investment. At the chart on the left, if some of the less popular responses were put together, the cumulative ROI numbers would be higher compared to click-through rates.

But the fact remans that while many marketers seem to have realized that the click-through is not the best way to measure ad effectiveness online, the lack of a better alternative means they’re still using it. And likely will for awhile.